They say that necessity is the mother of invention—and inventors have always been working to solve all of life’s little (and big) problems. Can you imagine, for example, a life without countless types of machinery, the lightbulb, sliced bread, the iPhone, or Google? Thanks to the cleverness of inventors, life continually improves.

But on the way to making their inventions available to the general public, an inventor has to file a patent. A patent is a set of exclusive rights granted by a sovereign state or intergovernmental organization to an inventor or assignee for a limited period of time in exchange for detailed public disclosure of an invention. In other words, it prevents other inventors with similar ideas from making, selling, or using the invention for a set period of time.

In celebration of the 10 millionth patent that was issued in June 2018, we wanted to take a further look at patent data to find out where some of the most innovative places in the country and the world were, what companies around the world are some of the most creative, and what types of patents are most issued. 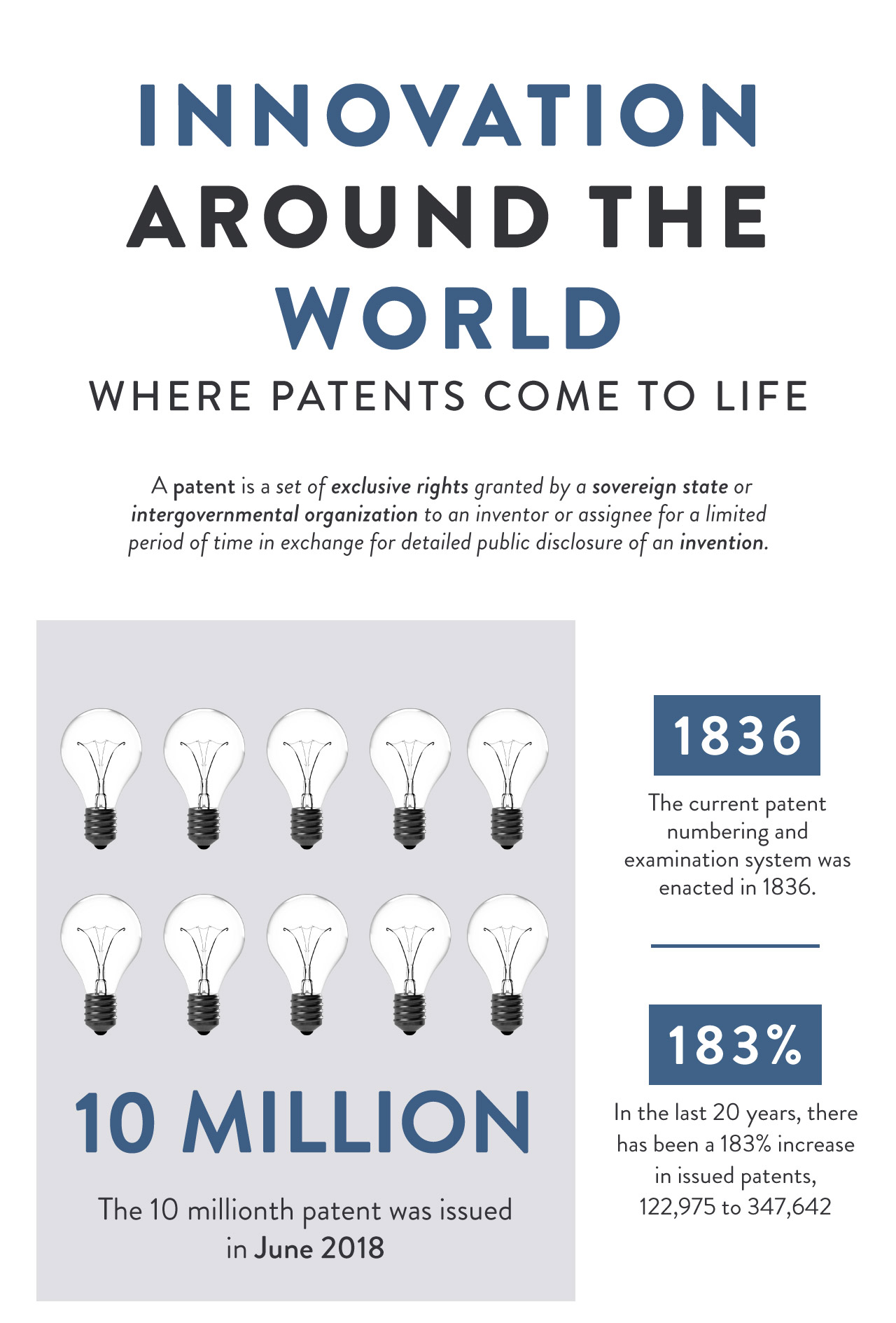 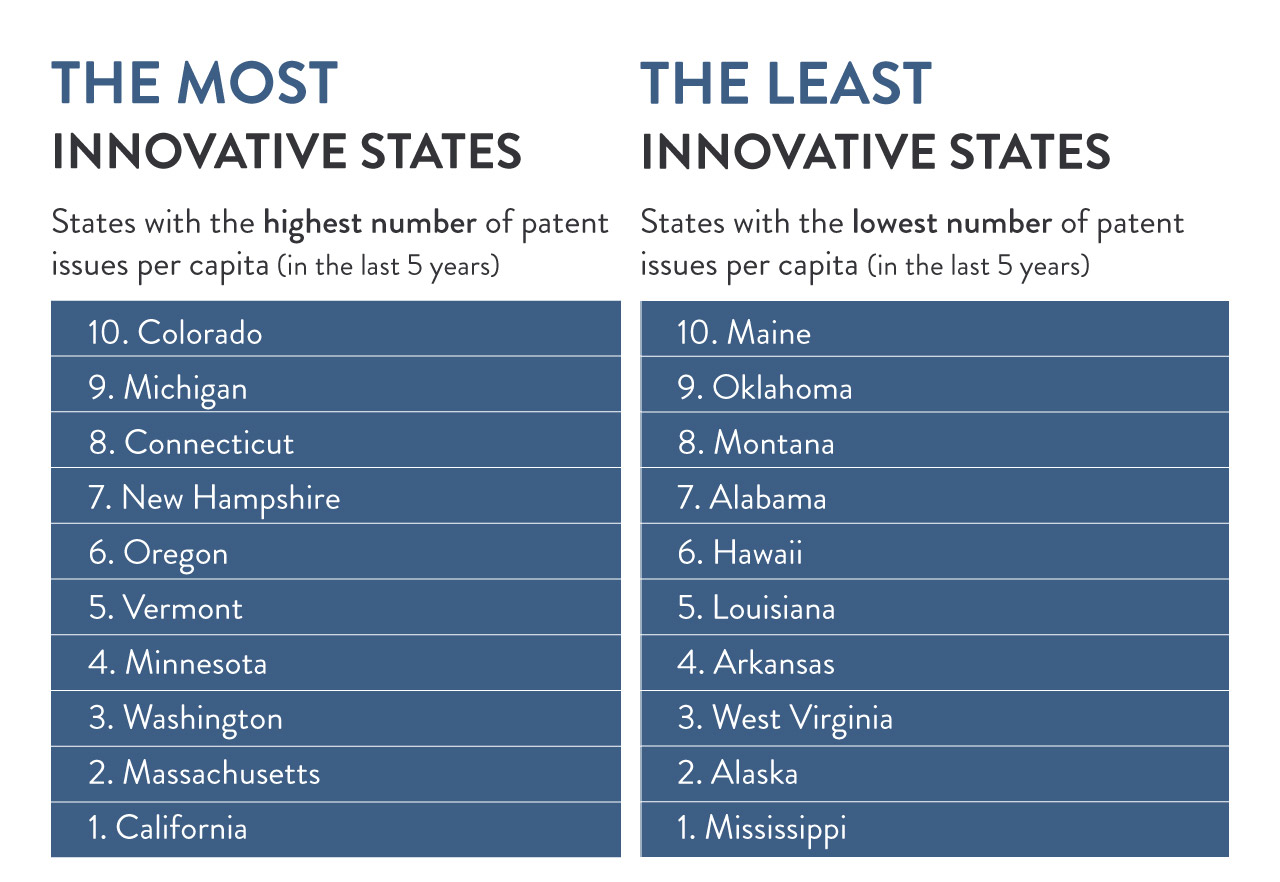 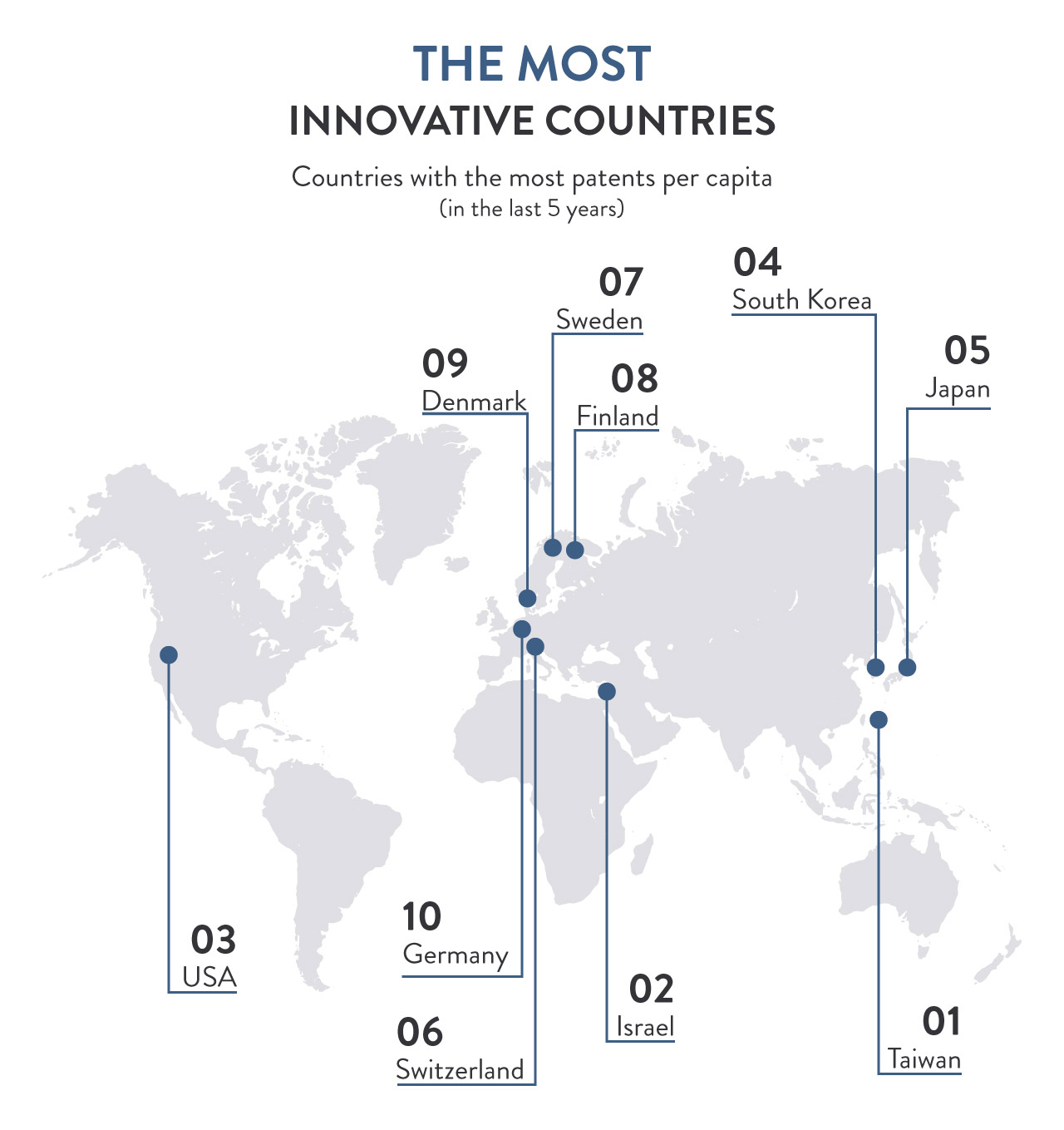 What Places are Most Innovative?

The current patent numbering and examination system was enacted in 1836, but in the last 20 years there has been a 183 percent surge of patent activity—an increase in issued patents from 122,975 to 347,642.

Throughout the world, there are several innovative countries that are also churning out patents. The most innovative countries with the most patents per capita are Taiwan, Israel, the United States, South Korea, Japan, Switzerland, Denmark, Sweden, Finland, and Germany. 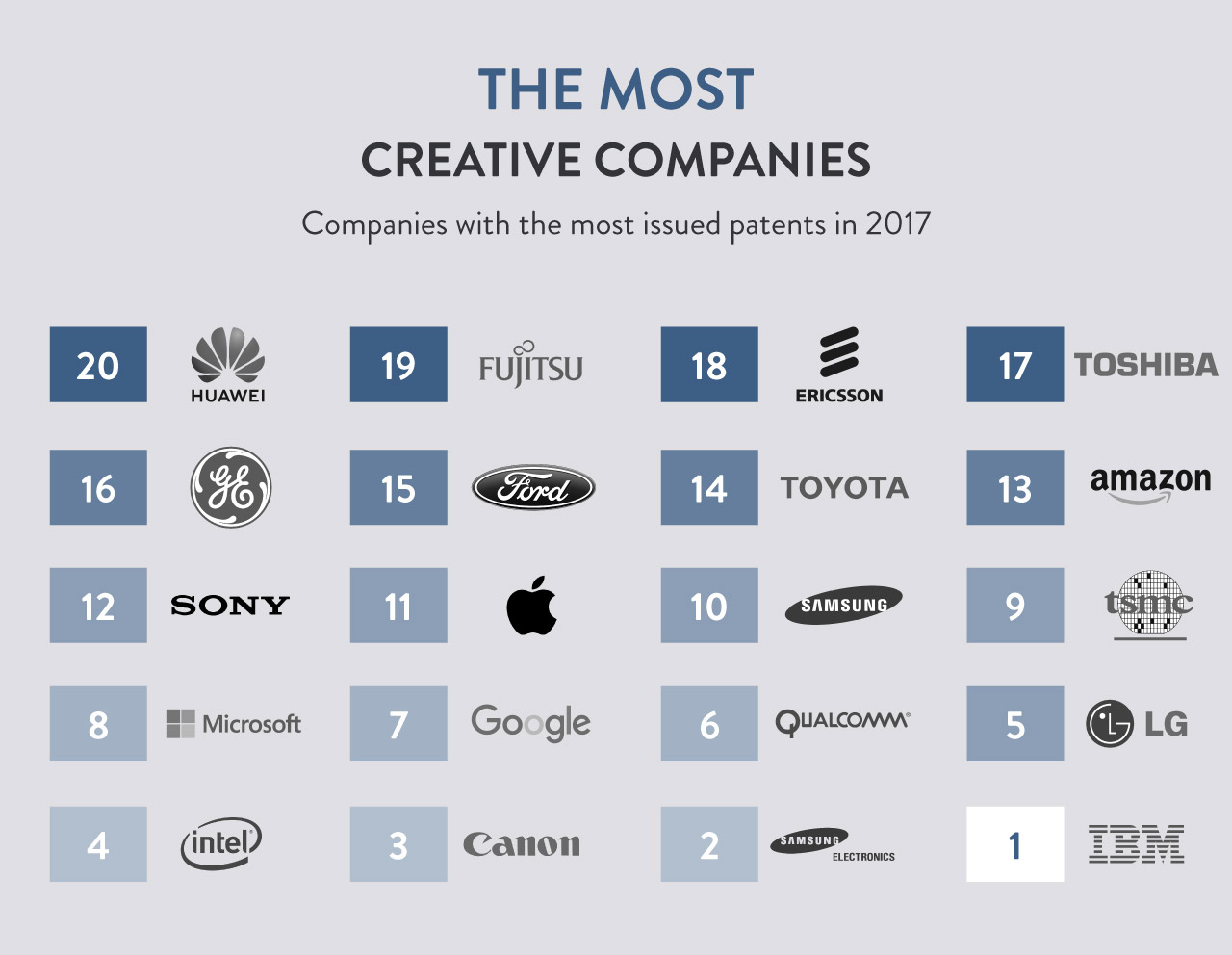 And when we think of patents, you might typically think it’s one person with a great idea, but companies can also file patents to protect their inventions. The 20 most creative companies with the most issued patents in 2017 were IBM, Samsung Electronics, Canon, Intel, LG, Qualcomm, Google, Microsoft, TSMC, Samsung, Apple, Sony, Amazon, Toyota, Ford, GE, TOSHIBA, Ericsson, Fujitsu, and Huawei. 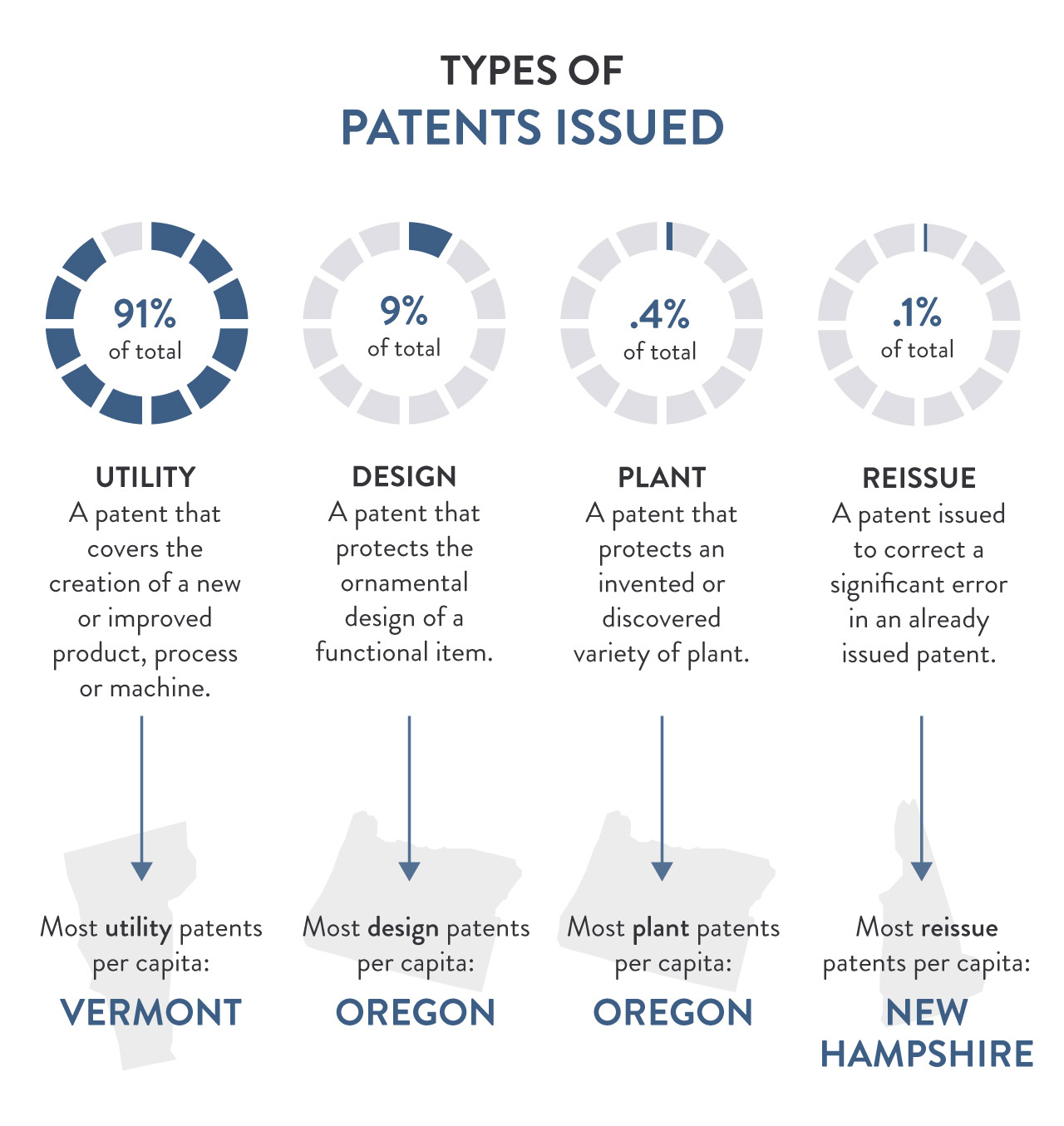 What Types of Patents are Issued? 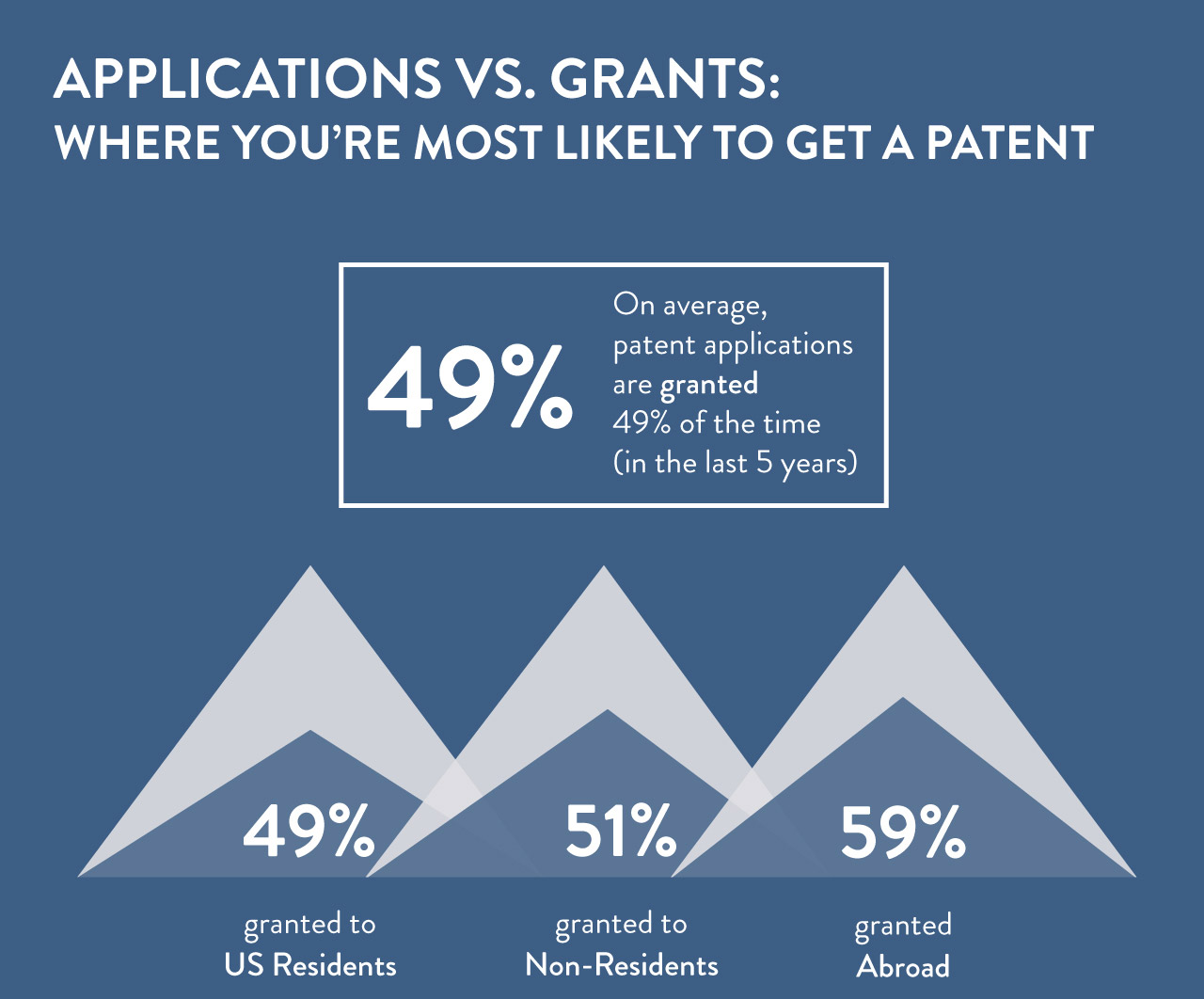 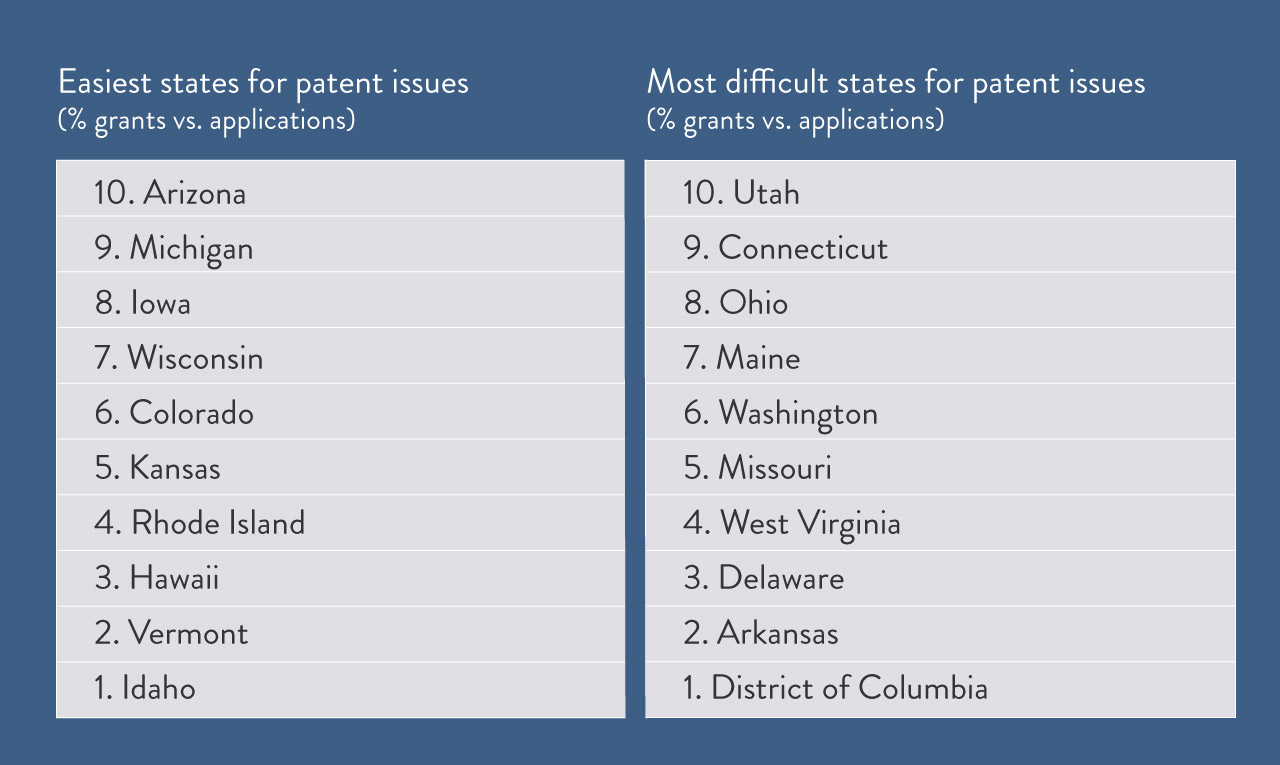 Where You’re Most and Least Likely to Get a Patent

So, where are your best chances in the U.S. to get a patent granted? The easiest states for patent issues (or the highest percentage of grants versus the number of applications) were Idaho, Vermont, Hawaii, Rhode Island, Kansas, Colorado, Wisconsin, Iowa, Michigan, and Arizona. And what about the toughest? We found that the toughest place in the States to get a patent was the District of Columbia, followed by Arkansas, Delaware, West Virginia, Missouri, Washington, Maine, Ohio, Connecticut, and Utah. 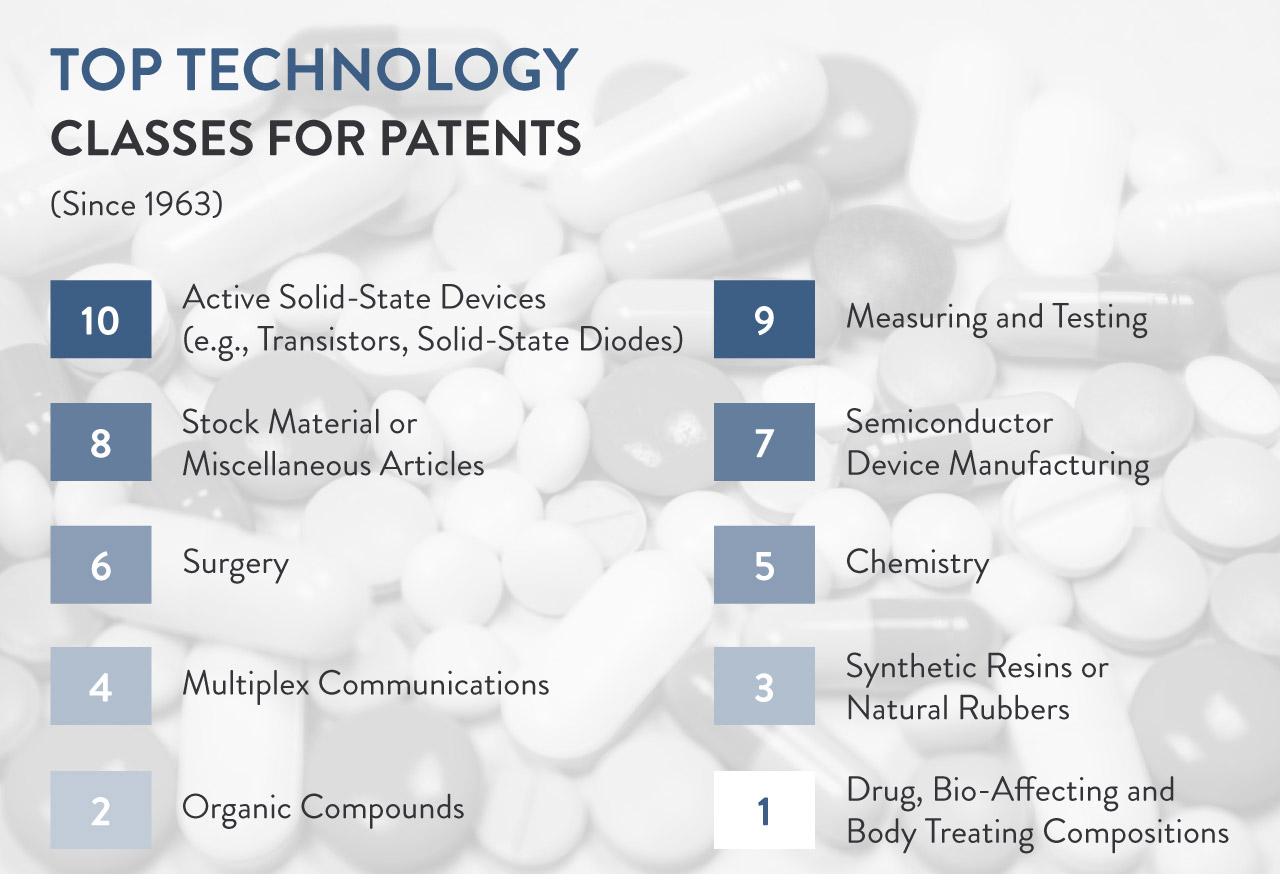 The Top Technology Classes for Patents

We’ve examined where in the world you’re most likely to get a patent and which states and countries are the most inventive, but what are these inventors actually inventing? It turns out, there’s a pretty vast and diverse range of inventions.

And from this rapid increase in patent grants, it doesn’t looks like it’ll take us too much longer to reach number 11 million.