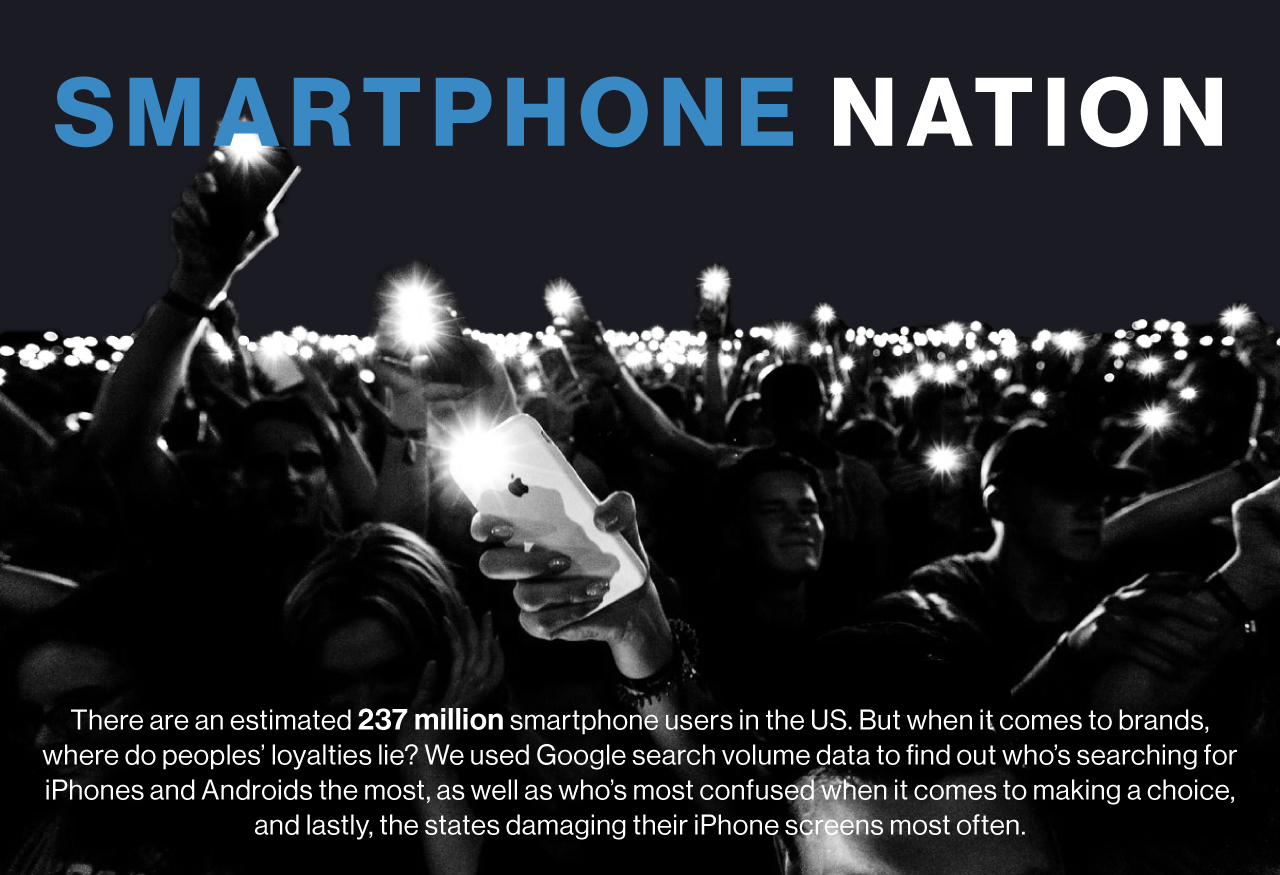 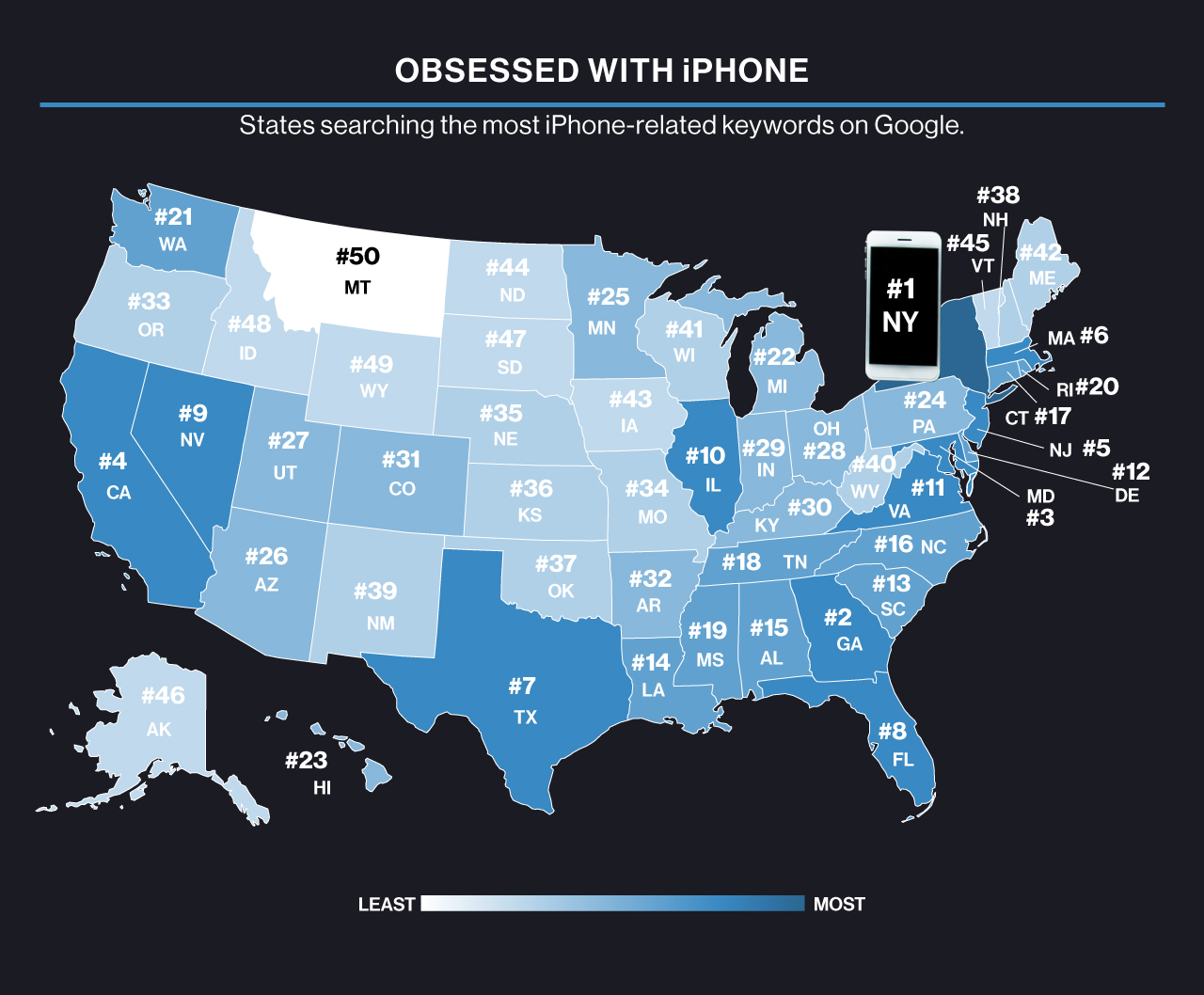 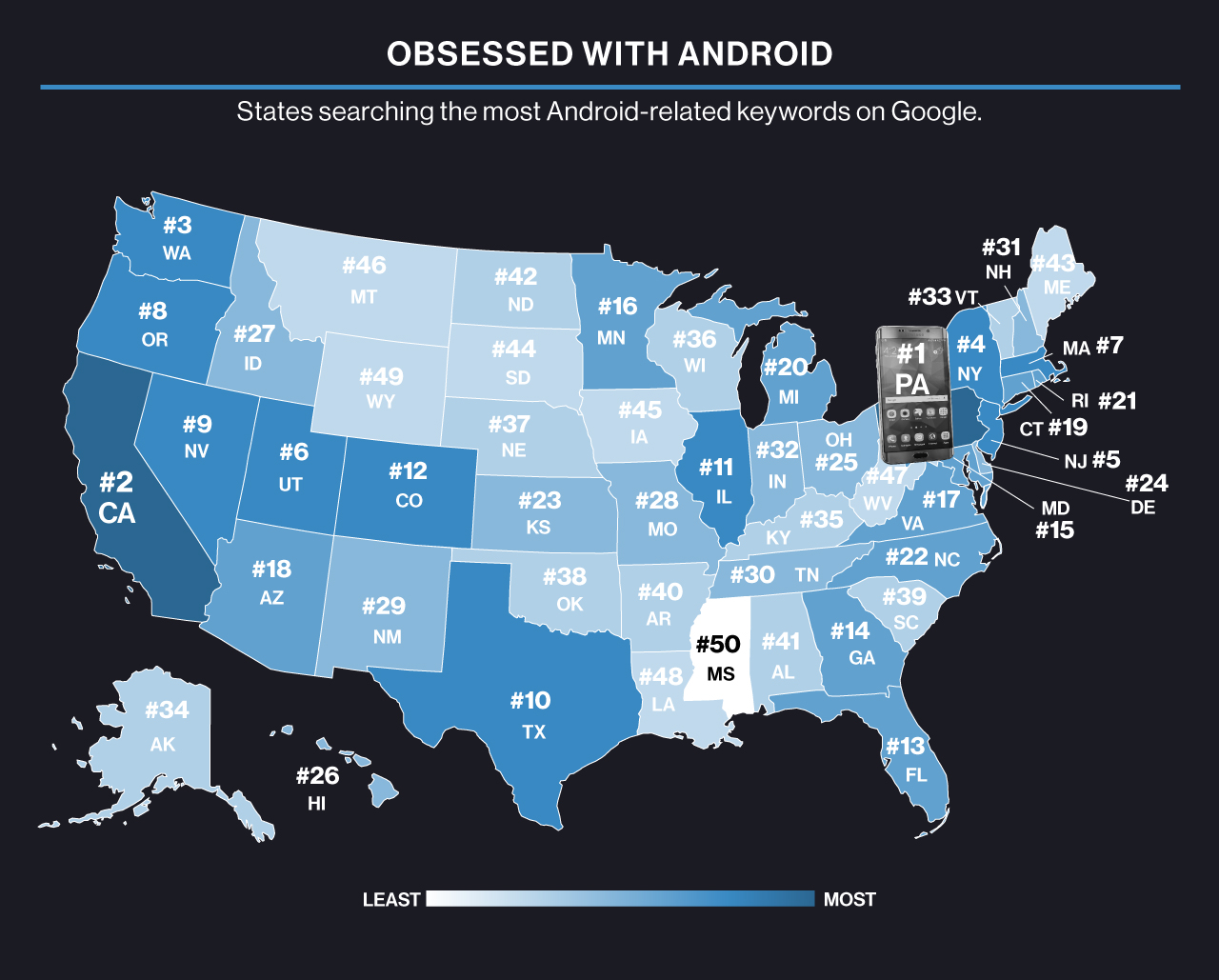 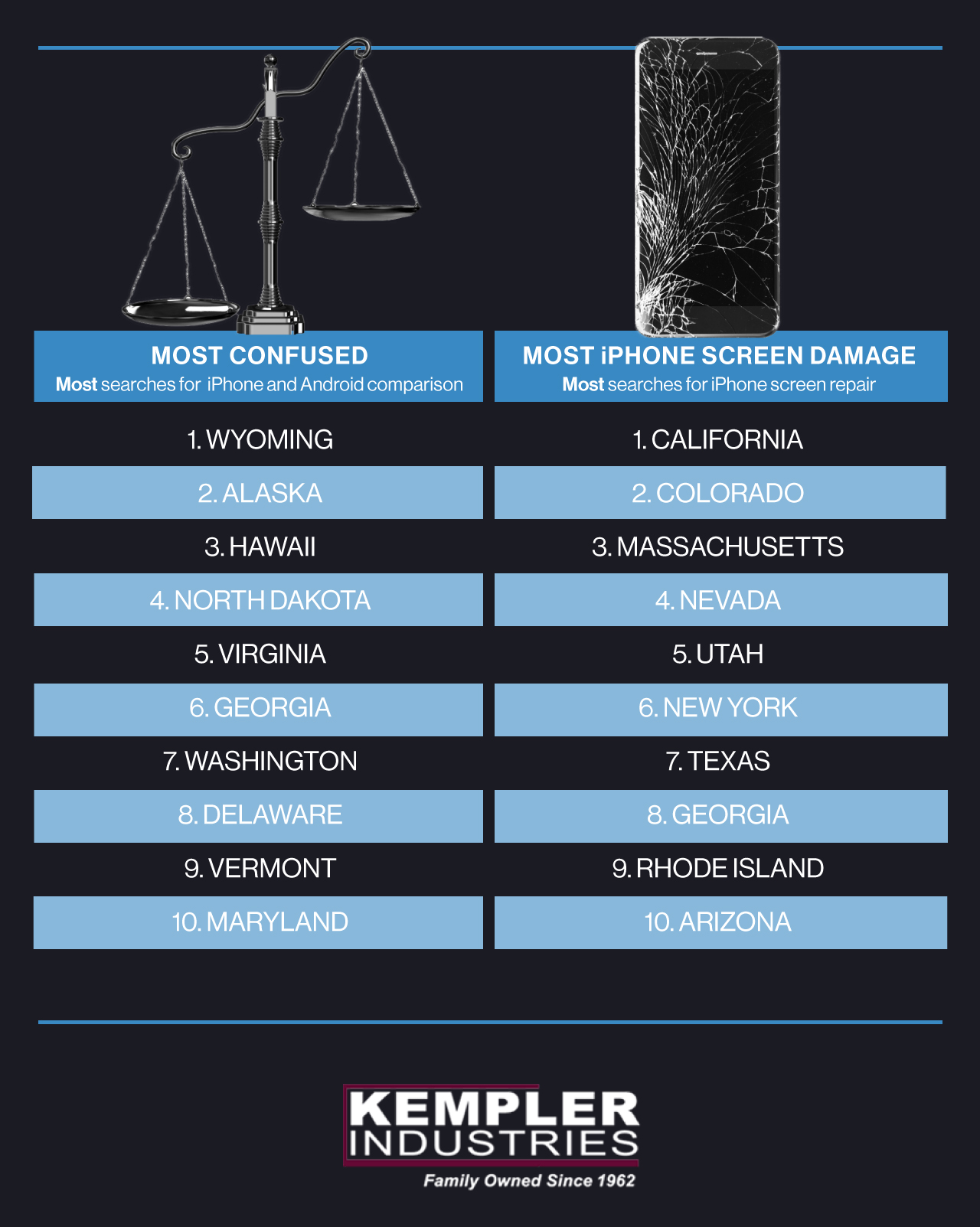 Are you team iPhone or team Android? Would you ever consider switching to the other side or are you pretty much set in your smartphone ways? There are currently an estimated 237 million smartphone users in the U.S.—and we wanted to know where their brand loyalties were. We used Google search volume data to find out who’s searching for iPhones and Androids the most as well as who is most confused when it comes to making a choice between the two. Lastly, we wanted to take a look at which states were damaging their iPhone screens most often (you know who you are!).

Admit it: Are you one of those iPhone obsessed people who has waited in line for the newest version of the iPhone? Or do you consider yourself more of a casual iPhone user? After combing through Google search volume data, we’ve figured out which states were the craziest about the iPhone—and which states could take them or leave them—based on states searching the most iPhone related keywords on Google.

So, which states didn’t exactly have warm feelings about the iPhone? Coming in at no. 26 was Arizona, followed by Utah, Ohio, Indiana, Kentucky, Colorado, Arkansas, Oregon, Missouri, Nebraska, Kansas, Oklahoma, New Hampshire, New Mexico, and West Virginia, which ranked at no. 40 in the country.

Finally, we have our bottom 10 states—the ones who had zero to little interest in finding information out about the iPhone, which included Wisconsin at no. 41, followed by Maine, Iowa, North Dakota, Vermont, Alaska, South Dakota, Idaho, Wyoming, and finally, Montana at no. 50.

Would you rather lick the bottom of a boot than own an iPhone? Does the idea of standing in line for the newest version of the iPhone fill you with disgust? You may just be one of the many millions of passionate Android phone owners across the country. We wanted to know where Android users would be in good company—and which states were completely indifferent to their existence. Here’s what we found after looking through the Google search volume data based on states searching for the most Android related keywords on Google.

The top 10 most Android enamored states in the country were Pennsylvania, California, Washington, New York, New Jersey, Utah, Massachusetts, Oregon, Nevada, and finally, Texas. Coming in at no. 11 in the country was Illinois, followed by Colorado, Florida, Georgia, Maryland, Minnesota, Virginia, Arizona, Connecticut, Michigan, Rhode Island, North Carolina, Kansas, Delaware, and finally Ohio, which came in at no. 25.

The bottom half of the Android lovers list begins with Ohio at no. 26, followed by Idaho, Missouri, New Mexico, Tennessee, New Hampshire, Indiana, Vermont, Alaska, Kentucky, Wisconsin, Nebraska, Oklahoma, South Carolina, and Arkansas, which came in at no. 40.

So, which 10 states were the least interested in Android phones? At no. 41 was Alabama, followed by North Dakota, Maine, South Dakota, Iowa, Montana, West Virginia, Louisiana, Wyoming, and finally, again in last place was Mississippi.

Unlike the patterns with the iPhone map, we noticed that much of the western portion of the U.S. is more in favor of the Android, and the eastern portion was less likely to search for anything Android-related. Again, the middle section of the country seemed indifferent to Androids, which makes us think that maybe they’re not too interested in smartphones in general.

You may think most people at this point are #teamiPhone or #teamAndroid, but believe it or not there are some consumers who are completely unsure. We found that the top 10 most indecisive/confused states when it came to choosing between the iPhone or the Android were Wyoming, Alaska, Hawaii, North Dakota, Virginia, Georgia, Washington, Delaware, Vermont and finally, Maryland.

We’ve all been there: That horrifying moment when we drop our phones and gingerly pick it up, in hopes that it’s not completely shattered. We found that the top 10 states with the most iPhone screen damage were California, followed by Colorado, Massachusetts, Nevada, Utah, New York, Texas, Georgia, Rhode Island and finally, Arizona.